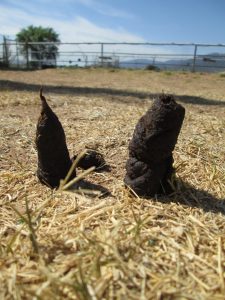 THE POOP ON POOP

Pick up the Dog Doo and hope that it’s hard. –song lyric

I wanted to do a whole book on Poop, but was informed that, like barfing, it’s a topic with the potential to make People feel a bit queasy. (I’ve also been told it’s not normal to run for the camera to snap shots of feces…!)

Where else on the web are you going to find a (woof!) chocolate-box of images such as the ones below? 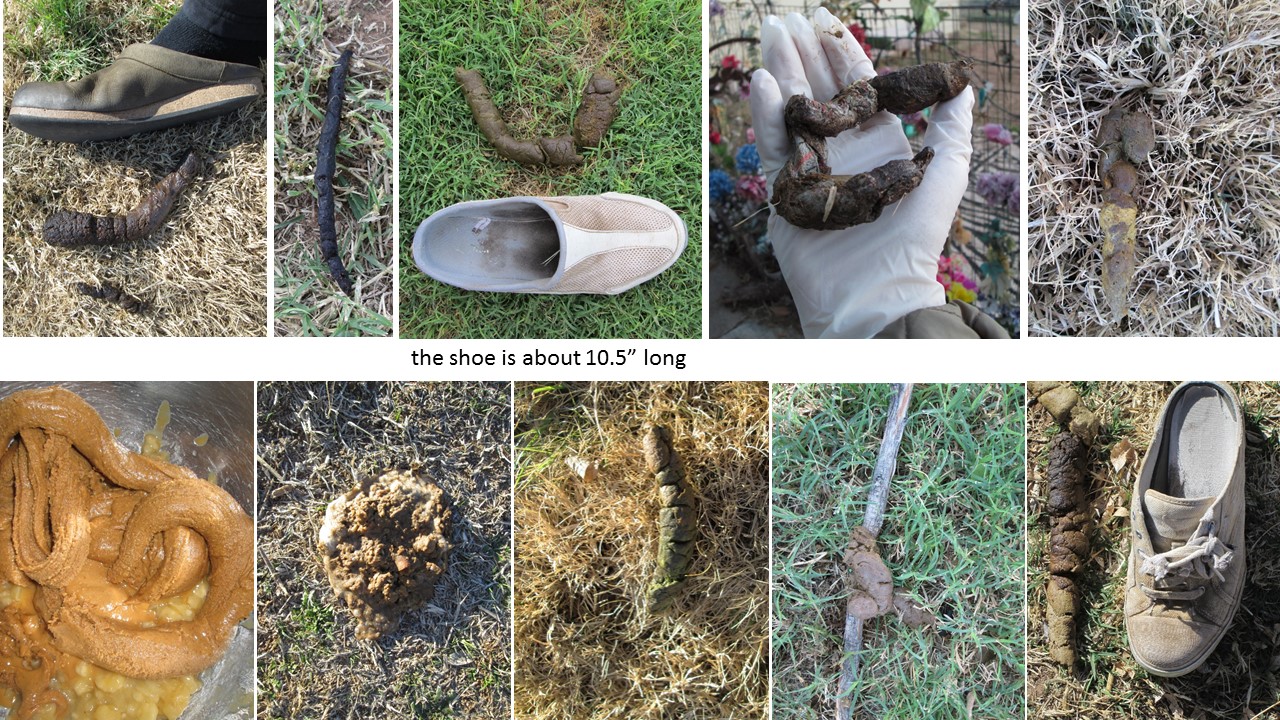 I’ve seen Pups (especially Labs) ‘lay railroad tracks’ as they walked and excreted simultaneously. I’ve seen things in Poop that should never have been ingested, tissue-wrapped and plastic-wrapped Poop, and Doody composed of nothing but blades of grass. Seeing a South Park Mr Hanky in the yard always made me laugh. 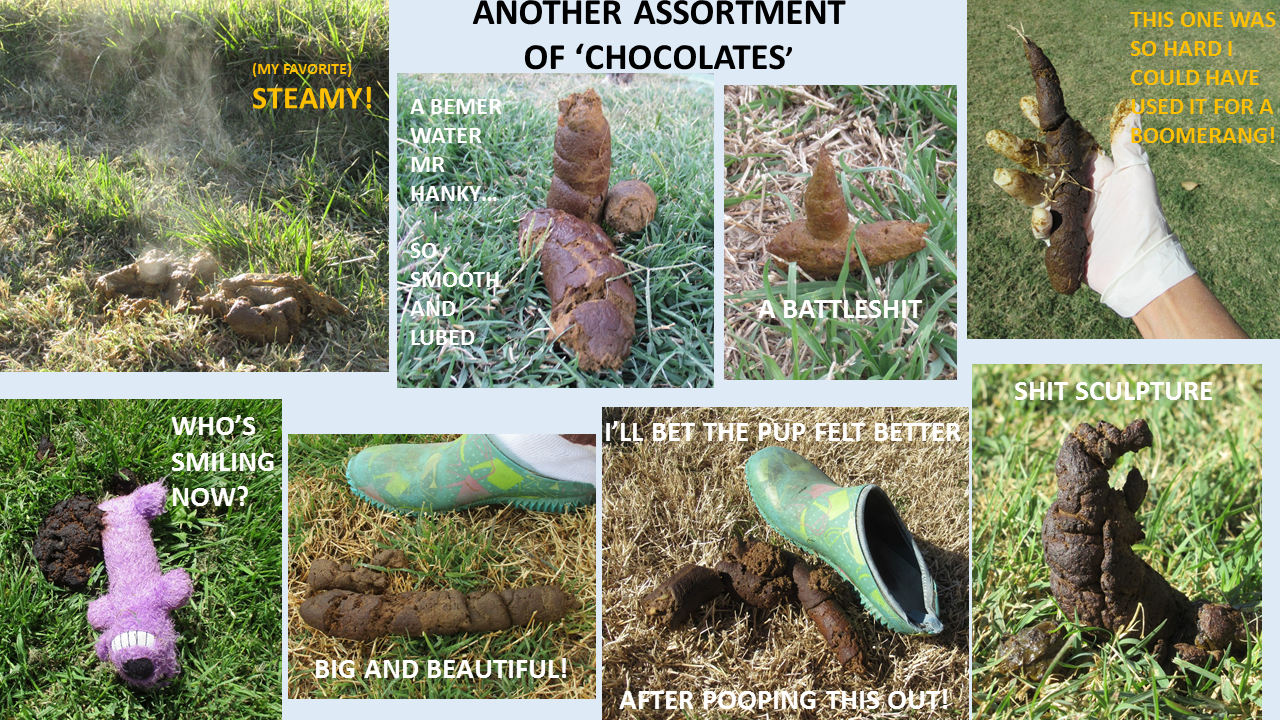 During the summer months I’ve scooped up puddles of Poo that were molten-lava hot. The cold of winter mercifully morphs feces into ‘Poopsicles’, which makes for quick, inoffensive pick-up. I have seen some Poop things so disgusting that I had to put them in a box and store them on the highest shelf in the furthest recesses of my memory, gross things that People would pay me not to tell them!

I had no idea how desensitized to Poop I was until just a few years ago when I took a Greyhound with digestive Issues to the Vet. First the Vet made sure I knew that Pups defecate 1-4 times per day, then he asked me to assign a number between one and five to describe the consistency of the Pup’s output. The number I hesitantly assigned was 1.5. Noticing my cautious indecision, the Vet whipped out a poster with drawings of Poop and together we discovered that what I had been dealing with (sometimes needing to remove it with a garden trowel) for months wasn’t even pictured on the chart! Yip yap yuck!

Diatomaceous Earth (DE) is my go-to for disgusting diarrhea. After removing the repulsive puddle I sprinkle some (natural, non-poisonous) DE over the ground where it had been. The DE absorbs moisture and will help to kill any lingering parasites (ants don’t like it either). It’s great stuff. Small amounts of food-grade DE can be given internally to help with various digestive and parasitic problems. Colloidal silver is another aid for episodes of diarrhea, ¼ to 1 teaspoon mixed into food or water. A tablespoon of shredded carrots mixed into meals will firm up loose stools.

Being Pooper Scooper for a Pack of Domesticated Dogs can often feel (and sometimes is!) like a full-time job in itself–one with far more considerations than you’d probably think. I remember cracking up after reading howooo Micki Voisard (author of Becoming the Chef Your Dog Thinks You Are) would take Clients on Poop hikes in order to expose them to a variety of excrement types! All I ever had to do was open a door and step outside—and just like that AlphaMom, Poop Detective, would be on the job!

Considering that at least six, or as many as twenty Domesticated Dogs used the outside facilities, it wasn’t always easy to know whose Poop was whose. So I would mix chopped carrots or corn or chlorophyll or pumpkin seeds or hemp seeds into a specific Pup’s meal to help with identification. Bonus: if any of the previously listed items hit the ground in another Pup’s Poop I knew there was a Shiteater in The Pack.

Besides digestively disagreeable food and Treats, less-than-fresh water or just drinking too much water can also cause diarrhea; as can medications, stress, hyperactivity, excitement, and ingesting certain insects. Several Veterinarians recommended feeding oatmeal and pumpkin when diarrhea occurred. To me this meant adding one teaspoon to one tablespoon of (uncooked) dry quick oats with the same amount of canned pumpkin to each meal.

Another popular diarrhea-halting remedy was to feed only cooked white rice and boiled ground beef or chicken. One day, after years of dealing with pretty much constant diarrhea from one Pup or another, I read a most illuminating article about carbohydrates. I Learned that some carbs are actually indigestible fiber (roughage) when eaten cold. As soon as I stopped mixing large amounts of cold rice in with the Kibble, diarrhea morphed into loose stools. Then, when I cut back to just one or two tablespoons of warm rice, firmness fully returned (hallewoofjah!) and I stopped dreading the two or three or four times each day I’d have to grab a plastic bag, put on an appropriate-weight-long-sleeved top, slip into shoes, plop on a hat, don a disposable latex glove, and Go Outside to fulfill my obligations as Head Pooper Scooper.

Obviously I could go on and on with Fun Poop facts (like howooo long it takes a meal to get from one end to the other) and stories (bow wow do I have stories!)…but (woof!) duty calls. If you’ve got a question about Doody Duty–or Poop in general–I’ve probably got an answer, so contact me. You’ll be glad you did. Woof woof woof!